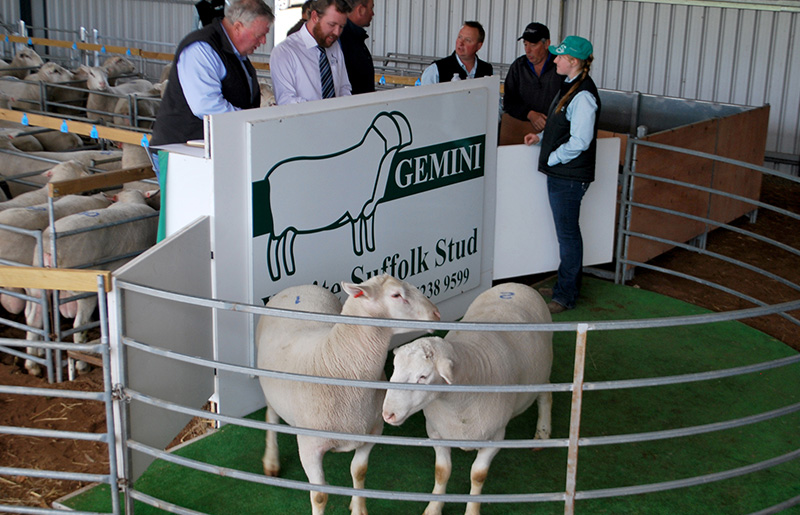 Despite the industry leading genetics they have always had on offer, Craig and Rosalie Mitchell and family’s results at their last three Gemini Prime Lamb Sires’ sales have at last reflected that quality.

Last Wednesday, 3rd February, they sold 57 Gemini White Suffolk ram lambs to a top of $1150, and averaged a solid $780 in a 95% clearance. This consolidates the results at their 2015 summer sale when 56 averaged $747, and follows on from their superb spring sale last October when 78 flock rams averaged $1259.

All the rams on offer were June 2015 drops, being exceptionally well grown, even in quality and type, and were supported by industry leading Lambplan figures. This included an average Carcase Plus index of 193.73, 12% above the average for all terminal sires.

Competition from the 14 registered bidders was solid throughout and buyers found their select lots no matter where they were in the catalogue. Ten rams sold for $1000 or better, with half of these being the first six lots, but three also being in the last eight lots. While the demand was good, with the result being solid and consistent with last year’s summer sale, it still gave excellent value to buyers, especially considering the current healthy state of the prime lamb industry. Every registered bidder was successful in purchasing from one to ten rams.

Gordon Last, Garvald Vale Partnership, Byaduk discovered the quality on offer at the 2015 Gemini spring sale when he purchased eight rams at a $1456 average. He was delighted to be able to follow that up in this summer sale, purchasing a further 10 rams, paying to $1000 and averaging $725, less than half his spring sale average which he still considered great value. Interestingly, it was the last ram in the catalogue that he thought to be the best one on offer and bid the $1000 necessary to get him. With figures of 15.10 for growth, -0.50 for fat and 2.40 for eye muscle depth, culminating in a Carcase Plus index of 204.38, he had strong supporting data for that claim.

Amanda Manifold, Milangil Pastoral Co. Pty Ltd, Camperdown also went to $1050 for one of eight rams she purchased, but with her other purchases being of even greater value, her buying average was just $775.

Also purchasing eight rams and paying to $1000 while averaging $819, was Scott Dennis, Birregurra.

Murray Johns, Bellbrae gained some of the best value considering the evenness of the catalogue, averaging just $633 for six rams. 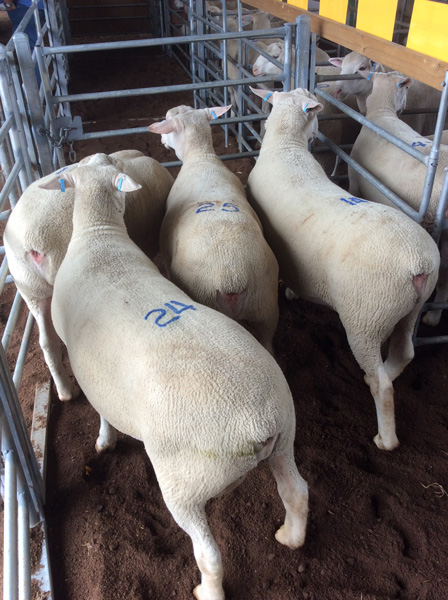 To highlight the great quality and value at the Mitchell family’s summer White Suffolk ram sale, these 4 ram lambs (7 to 8 months old) sold for an average of just $812.50 to Malcolm Little, Birregurra, Vic.