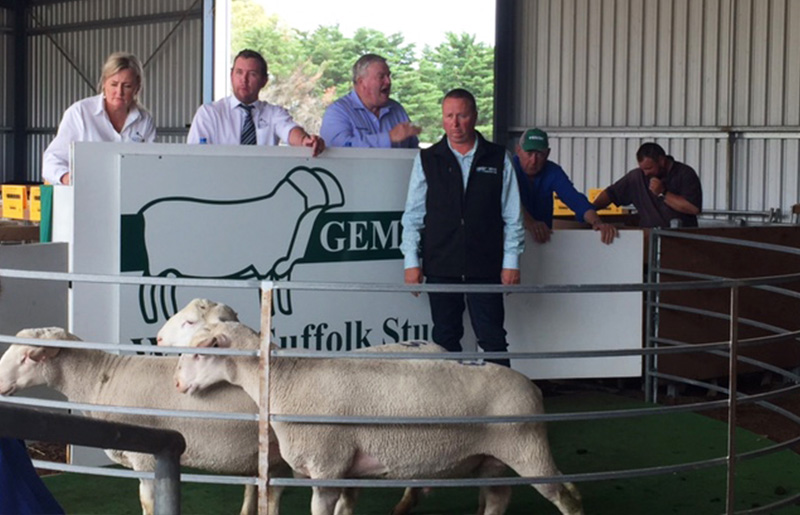 After many years of receiving less than value for their high performance rams, the last two years of summer and spring sales have seen that turn around, justly rewarding the Mitchells for their years of hard work and dedicated breeding.

This on-property sale at Werneth was instigated primarily to cater for the many spring lambing prime lamb producers in their district west of Geelong, many of whom are still unsure of their ram requirements in October when Gemini’s annual spring ram sale is held.

Combined with the last spring sale, this sale result has seen Gemini clear 153 White Suffolk rams at auction to a $4500 top and average $1297 in the last 5 months.

Every ram lamb offered was way ahead of breed and industry averages on Lambplan for performance, especially growth and muscling. Their verifiable performance levels played a significant role in the strength of bidding they attracted, with more breeders now aware of their quality and the results they produce in clients’ paddocks. Last year 57 sold to $1150 and averaged $780, so this result produced a significant lift.

Garvald Vale Partnership, Byaduk and registered through sale managers GTSM paid the $1750 top price for one of seven rams they purchased at a $1257 average to also be the equal highest volume buyer. They first discovered the Gemini quality in spring 2015 when they purchased eight rams, and were back for a further ten last spring sale. Their top purchase in this sale was G 160042Tw; sired by Galaxy Park 120367 it had a Carcase Plus index of 208.89.

Dweal Pty Ltd, buying through TB White & Son, Ballarat was the other high volume buyer in the sale, successfully bidding on seven rams to $1500 and at a $1271 average. Two other clients of TB White & Sons, Ballarat came in as the next most prominent buyers with six rams each; this agency being the purchasing agent for 23 rams.

Bungeeltap Pty Ltd paid to $1650 twice which was the second top price and achieved the highest buying average price of $1542 as they selectively chose very top end performance rams. Three of their six rams were over 200 on the C+ index and the other three just under it.

Langi Willi Pty Ltd was the other buying account purchasing six rams. They paid to $1250 and averaged $1075, operating a rung below the top bidders in price, but arguably lost little in performance levels such was the depth of quality in this offering.

Three of the 25 registered bidders purchased five rams each.

EM & PG Schenscher, through Landmark Naracoorte, SA made it a two state buying list when they purchased five to $1400 and averaged $1120.

GTSM’s Miles Pfitzner again refereed the bidding in his professional and exuberant style which went a long way towards producing this top sale result.